When you own a Prius, it just screams “TAKE ME ON A ROAD TRIP WOMAN!!! I AM GREAT ON GAS!!” Well, one can’t argue with a Prius. So if you can’t beat em, ya mise well join em. Plus not to mention gas is pretty darn cheap right now, so we decided to hit the road. The boyfriend got one heck of a deal on a hotel room in Chicago and I found a bunch of Groupons that were to good to pass up.

Armed with many Groupons and our hotel reservation confirmation email, we dropped the muppet like dog off at Grandma’s and hit the open road. It is exactly six hours to Chicago from my parents house, we settled into the drive. Playing the “lets find religion on the radio game.” We found it eight times, well I found it eight times, as Jay slept for most of the way. He missed all of the really boring landscapes, billboards, and crazy I94 drivers. Don’t worry folks, he woke up just in time for the greatest time suck in the world aka Wisconsin Dells. More particularly Cracker Barrel, there darn shop gets me every time. Sell me an $8 breakfast and I will turn around and spend 50 bucks in your shop.

With food in our bellies and a new ceramic bird lamp in tow, we hit the open road. This time Jay was driving and I got to play co-pilot! Which is actually really strange for me because A. I never let anyone but my mama drive my Prius and that’s only if she asks nicely and B. I am always the one doing the driving. But alas I decided it was best to loosen my grip on the wheel and let Jay wear the pants. As you can tell I am alive, so yes he did a very good job driving the Prius. 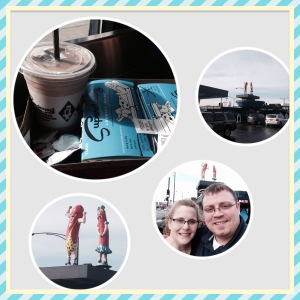 I was super excited to be in Chicago with Jay, more so I was excited to show him my spots. Some of those spots are like a right of passage. Hello! Weber Grill Restaurant, Super Dawg Drive In, and Gino’s East. Not to mention I did drag Jay to the hood to buy Garrets popcorn. He was a good spot and served as my navigator. I locked the doors when our surroundings turned into sketchy territory.

Speaking of territory, we were looking forward to using the hotel hot tub. Well that was until we walked in only to find a very nice couple having sex in it. Yup, they were doing it in the hotel hot tub. I had to mention it in this post, because that image is forever burned in my pretty little head. You have a visual now and you are so welcome. 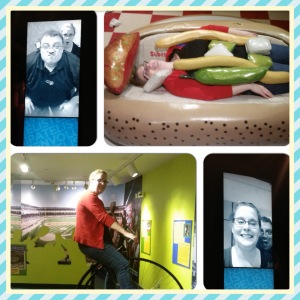 Welcome to the Chicago History Museum. I managed to snag a buy two for the price of one Groupon for the museum. The Chicago History Museum is self explanatory, its the history of Chicago. The museum is pretty fun, Jay and I had a riot in the kids discovery zone. I even became a Chicago dog, rode a very tall bike and jumped from spot to spot in a discovery game. The kids zone was losing its luster and my tummy was yelling “feed me deep dish pizza!” With that we said goodbye to the museum and headed out for deep dish.

Gino’s East is a Chicago institution and it never disappoints. Groupon once again proved to be my friend. Right now you can pay $16.00 for $30.00 worth of food at Gino’s. Folks, that is a $14 savings. We had no problem using our groupon and ordered the large meat deep dish. It was so good! Jay and I could barely eat two slices. Thank goodness for pizza boxes and hotel refrigerators, cause we had half a pizza to take home with us.

Gosh Darn Sunday came to soon, snow started to fall as we rolled out of Chicago. Home, was our destination and since we left early we had time to stop in The Dells. Its so weird being in The Dells during the winter, I am use to the summer buzz and thousands of people. Luckily a few of the stores on the strip were open and I was able to procured gummies and a toy for Sophia. I introduced Jay to Mac’s Memphis Mac and Cheese, we split the large. It was amazing as always.

When we got to Grandma’s house one very excited muppet like dog was extremely excited to see his mama. Muppet like dog hugs are the best little hugs and I was glad to see him too. Truth, I would totally do a million road trips with Jay, he wasn’t annoying, he was a good sport, and darn right fun to be around. I love that man and I am looking forward to what this life has to offer us.