Something told me to find my family before I attempted to transfer Embryo #3. I cannot explain it. Deep down my soul was telling me “find Grace, find your family, and go HOME.

In early September my Dad and I went home. Home to Crow Wing and the White Earth Reservation. There I touched the house my ancestors built and walked amongst their graves. I did what my Grandfather never did, I went home for him. My heart she wasn’t settled, she needed to find Grace. She needed to stand before the woman who never gave up on her children.

Find a grave. com is an amazing tool and it helped me immensely. Fate had a hand in this too. Someone had documented Riverside Cemetery in Seeley WI, Grace Geneviève Beaulieu Cox’s stone was amongst the photos. My Great Grandmother’s stone was staring back at me plain as day on my iPhone screen. When I looked it up I realized that I had driven right by her for years.

Hayward is Wisconsin’s vacation land and it’s a place I try to visit every year. The Main Street is lined with cute little shops and there are lots of restaurants serving down home north woods cooking. If you venture outside of Hayward you will see “canoe landing” signs dotted along the highways. The area is amazing for canoeing. Speaking of canoeing; I AJ canoed right by my Great Grandmother’s grave and didn’t know it. I have driven by Grace’s grave every fall on my way to Bayfield. She was there in Seeley, just waiting to be found. Waiting for us to stand before her and say her name.

She was lost, but now she’s found. My dad and I instantly spotted her grave when we pulled through the cemetery gates. My dad never got to meet her when she was alive. I watched as he laid the tobacco down and said “Grandma you’ve been found.” After Irene died I was allowed to go through their home and pick out items I wanted. Nestled in a corner covered in dust was a statue of an Indian woman with a baby on her back, I was drawn to this and put it in my box. It’s been sitting in my garage ever since and I had no plans to bring it inside. It came to me that the statue was meant for Grace. I held the statue steady as my dad squirted the glue and I stuck it to the concrete. My dad instructed me to push down and give it a little twist so it will stick. We gave Grace her heritage back. 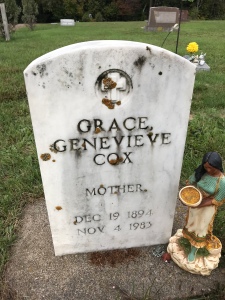 After Grace’s children were taken she did what she had to do to survive. She got married and made a new life for herself all while still holding out hope that her children were alive. Grace reunited with my Grandfather, her son was lost, but now he’s found. I cannot imagine what that moment looked like, when he was taken he was around 5 years old and when he was found Clifford was a middle aged man. Grace was whole, her children were found. Seeing my Dad stand before Grace, his grandma was something I will always treasure. My Dad is now whole too. He got to touch the stones of his ancestors and lay tobacco down to acknowledge that because of their battles he exists.

And now I feel whole too. Whole because I stood before the grave of the strongest woman I never got to meet. The courage and determination she had was beyond measure. I relate to Grace; our lives are similar. Like her, I know what it’s like to have your life ripped to shreds. I know the strength it takes to build a new normal. To never give up fighting for your children. Dead or alive your children will always be yours and you need to fight for them.

Grace once was lost, but now she’s found and we are never letting go. My Dad and I decided that we are going to visit her grave often and I have faith that one day Embryo #3 will stand before her.