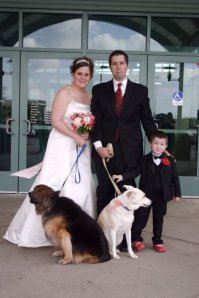 This Friday would have been my fifth wedding anniversary. I said I do on May 31st, 2008 and I had one incredible wedding. Looking back that is still one of the best days of my life. I can honestly say I had my dream wedding and loved every moment of it. I have no regrets, in that moment I was incredibly in love with Scott and proud to be his wife. I honestly never thought I would get married and there I was in my Waters by Waters gown walking down the isle on my Daddy’s arm to the tune of “Bless the Broken Road” by Rascal Flatts. I was in tears before I even hit the altar. Scott and I were surrounded by our family and friends. Still to this day people tell me that our ceremony was the most emotional wedding they have ever been too. On that day I just wasn’t marrying Scott, I was accepting Nylan as my son. Scott and Nylan were a package deal or as I would say, when I met Scott, I got a two for one special.

It was important for me to make this day special for Nylan, as this was the day that Nannie marring his Dad. The minister said a special passage about family. Terri talked about how some women come into this world knowing that they will have the capacity to love another woman’s child as her own. We made a vow to honor and cherish Nylan for the rest of our lives. Instead of a unity candle we had a sand ceremony. Three vessels of sand represented our individual lives and once poured into a single vessel the grains can never be separated again. We were a beautifully blended family.

The first few months of our marriage were fine. Scott had his vices and I was just the woman who took care of his child. The threads slowly started to unravel. Scott would tell me he loved me, yet his actions spoke louder and told me otherwise. Soon he grew distant and I was seen as a chore. I was someone he lived with and not the person he couldn’t live without. We fought hard and it always resulted in me apologizing to Scott for the mistakes I made. In his eyes, I was always the problem, I was the reason our marriage was failing. Yet I loved that man with all of my heart, I gave him everything I had and then some. I put up with his vices and things that a woman should never have to face. I did things I never thought I would do in an attempt to make him happy. It was never enough and I was never good enough.

I was always there when Scott needed me and would drop everything to be at his side. On October 22, 2009 I needed my husband. I needed him to tell me it was going to be all right when my world was spinning out of control. He slept through the numerous calls from the hospital and when he did respond he was more concerned about missing work than rushing to his wife’s side. The ER staff told him it wasn’t good and he should get there ASAP. I will never forget the look on Scott’s face when he walked into the ER bay. He turned white, tears filled his eyes, and in that moment I knew he loved me. He felt terrible for ignoring the calls and as the doctor explained the trouble I was in tears fell down his face. He squeezed my hand and said “you can’t leave me now, its Bear and Mr. forever.”

For a while Scott gave up his vices and actually acted like a husband. Scott came home at a decent hour and for the first time in a long time spent time with me. Scott was still the same, yet I had changed. I was not the same and I was angry about it. He listened to my frustrations, quietly picked up the multiple coffee cups, and stood by me as I tried to cling to my old self. Sadly this wouldn’t last, as I got stronger Scott returned to his old ways and soon I was sitting at the bottom. I was no longer important to him and everyone else came before me. By February he quickly forgot that his wife almost died four months prior. He reverted to a world filled with WOW, whores, and Magic the Gathering. I never fit into the WOW Magic Whore equation, I was simply the woman he called “wife” and nothing more.

The final thread let go on the day I found out that the baby I was carrying no longer had a heartbeat. I knew my marriage was over the moment he refused to get on a plane and come home. In that moment Las Vegas mattered more to him than standing by his wife’s side. It was easier to hang with the guys, than to come home to the woman who was carrying his dead child. Scott, even admits that he regrets his decision to stay in Vegas and not being there as I went into surgery. He said “I didn’t know what to do, I didn’t know what to say so I stayed in Vegas, it was my way of avoiding it. I was selfish.” That he was.

Scott and I saw our two-year anniversary, it was a bit awkward. Again Scott was still the same and I was not. Not only was I a pulmonary embolism and stroke survivor, I was now the mama to a baby in Heaven. In away I felt like I was paying for the shitty things Scott did. Like Karma was kicking my ass instead of his. A wise yet slightly unstable attorney gave me some advice that ended up changing my life. He said “It all comes down to a judgment call, there are no winners, there are no losers in divorce, it’s just someone has to make the call and call it quits fist.” Those words seeped into my head and I was ready. On June 27th, 2010 I made the call, I threw in the towel, and walked away from a broken marriage. In my heart I knew there wasn’t enough crazy glue in the world to put us back together.

If I had never said I do, I would have missed out on the storm that was our marriage. I do not regret anything. Honesty I cannot count the father of my children as a regret. Together Scott and I traveled the world, watched Nylan grow up, and became parents to a baby in heaven. We had our moments in the sun, but found ourselves standing in the rain. In the end Scott and I were two souls destined to collide in a beautifully broken disaster.