Wisconsin would always be home to the Ringling brothers and Baraboo would prove to be the perfect wintering ground for the brothers and their performers. The Ringling’s spent their winters designing and fabricating new props and wardrobes, hiring new and returning performers, planning the route the circus would travel, and laying out their new advertising campaign. They also cared for their animals which in 1916 consisted of: five hundred horses and ponies, 29 elephants, 15 camels and about 20 other hay eating animals, plus tigers, lions, monkeys, and birds including ostrich. Today only 10 of the original 25 structures remain in Ringlingville and are open to the public.

As the glory days of the great railroad circuses began to fade, John M. Kelley, personal attorney for the Ringling brothers, saw the need to preserve the history of the circus. To this end he joined forces with members of the Gollmar Family, first cousins to the Ringlings and circus owners themselves. The team incorporated Circus World Museum as a historical and educational facility in 1954. Following Circus World’s opening on July 1, 1959, the site was deeded debt-free to the State Historical Society of Wisconsin. What began in 1959 with less than an acre of land, six old circus wagons and a boatload of passion, has now become an internationally recognized historical treasure.

Circus World is an important part of American History. For children, it is an eye-opening experience that they cannot get in a classroom. For adults, it is a look back at the good times before iPads and smart phones took over as a form of entertainment. My parents went to Circus World in the 1970s, however they only saw it from outside. To their disappointment they arrived at the museum after closing time and were not ale to visit. They told this story to me numerous times throughout my childhood, I think it was a lesson to always check to see when things close and to be on time. 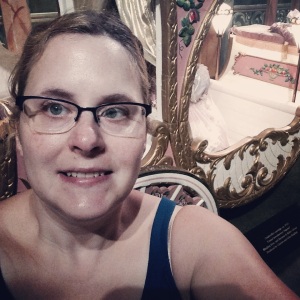 As a little girl I loved going to the circus. My parents took me every time it came to Red Wing, it was always held at the Bergawald Arena and it was usually in the spring. Cotton Candy and a pin wheel kept me company as the acts unfolded before my eyes. Elephants, acrobats, and clowns danced around, and I was as happy as a clam. At 31 I had child like excitement as I plopped down my $19.95 and strolled under the entrance sign.

I love museums where one does not have to tag after a stuffy tour guide. At Circus World you can tour the grounds at your own pace and there is no one trying to stuff facts down your face. My mom and I wondered from building to building, reading, pointing, and chatting about how much work goes into putting the circus on. We made our way through the Irvin Feld Exhibit Hall and we made are way up the hill to the W.W. Deppe Wagon Pavilion which holds a

collection of over 50 historic circus wagons. From the wagon pavilion my mom and I trucked on over to the C.P. Fox Wagon Restoration Center and got a glimpse of the wagon restoration process. We took in a magic show, the magician was pretty good and he told us “don’t miss the big top show.”

Big top show, my little heart pitter pattered at those words, and we made our way back down the hill. I spied an elephant and skipped on over to visit her. I cannot being to tell you how happy she was, she was probably the happiest little elephant I have ever seen in captivity. At Circus World they pump circus music over he loud speakers and this little elephant was keeping with the beat. She was enjoying the day, swaying back and forth, swinging her trunk, swishing her tail, and stepping to the beat of the music. The elephant made my trip to Circus World worth it. My mom pulled me away and we walked on over to the Side Show display.

Inside the tent they tell the stories of the bearded lady, tiny Tim, the fat lady, and the really tall man. These folks were not freaks, they were human just like you and me. I could not imagine being put on display and having people point and laugh at me for days on end. This to me is the dark part of the Circus and I vacated that tent and made my way to the big top!

Yay! A circus at Circus World, wow that’s a crazy concept. I bought a Snapple an some cotton candy, yes I am five and found a spot inside the tent. The circus did not disappoint, puppies did tricks, the ponies pranced, the acrobats spun, and the elephants, OMG the elephants were my favorite part of the entire show. The show did not disappoint and it lasts for a little more than an hour. I was content with my visit and with a grumbling tummy I was ready to head on out.

If you find yourself in the Wisconsin Dells area, pull your ass away from the water slides and take a short drive to Baraboo. Circus World does not disappoint, show your children a piece of your childhood, munch on cotton candy, and let your heart fall in love with the circus all over again. Trust me, you will be glad you did.