The Minnesota State Public School for Dependent and Neglected Children was created by the effort of the 1885 State Legislature, Governor Lucius Hubbard and Reverend Hart. Before this facility was created, orphaned, dependent, abused, and neglected children were placed in country-poor farms with adult derelicts, petty criminals, alcoholics, and the mentally ill. This school was created to be a haven where these children could be saved and transformed into productive members of society.

There were 16 cottages on the grounds that housed up to 500 children at any time. Children were constantly being placed out and new and unfamiliar children being placed in. These were orphaned, dependent, neglected and abused Minnesota children who had been made Wards of the State by the probate courts. The State School was to be a temporary home, preparing the orphans for adoption or placement in new, “good homes.” While the intent was to keep the children only for a few months, some stayed on for years and became institutionalized. 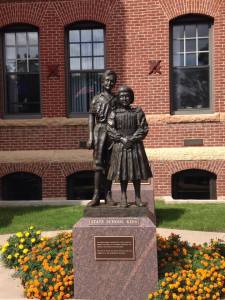 By 1945, the state legislature, on the advice of childcare workers, phased out the orphanage and the institution took on a new role of providing academic and vocational training for Minnesota’s mentally challenged children. That era ended in 1970 and the State School was permanently closed. In 1974, the City of Owatonna purchased the campus to house city and administration offices.

Haven? For some the state school was a haven and for others it was their hell. Between 1886 and 1945 10,635 state schoolers passed through the doors and walked the grounds of the orphanage. Sadly for 198 children the orphanage became their final resting place. The first 47 children were buried with a tombstone. However, the practice was then changed. The next 151 children who died were buried simply with their identification number etched on a slab of cement. 151 children were simply marked by a cold slab and a number. During our visit to the orphanage museum my dad and I spent a lot of time in the cemetery. As you walk the rows is seeps in that you are walking the graves of children. 198 beautiful souls rest beneath the trees. As we walked the rows we read their names allowed, acknowledging the little lives that were lost.

I was caught off guard, I had to look three times to make sure I read my own last name correctly. Possibly one of our own lies in this hallowed ground. Fred Beaulieu, may not be related to us, yet we are going to claim him as our own, no one deserves to be forgotten. Lord only knows my Grandfather could have been one of the hundreds of Native American kids that walked through those doors. Once he made it to Saint Paul history loses track of him and he pops up in Lake City years later. 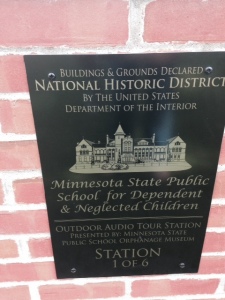 My Dad and I walked the grounds of the State School. The Orphanage museum has six audio stations littered through out the grounds and the voice of Harvey a former state schooler tells you about life at the school. Not only does this self-guided tour give the history of the State School, it also loops you though the grounds so you may take in the historic architecture and re-faced Root Cellar. Each audio clip last for about five minutes or so, my Dad always beat me to the button, I think I only got to push one of the six. We had a lot of fun listening and learning about the state school and the kids that called it home.

The audio tour brought us to Boys Cottage 11. Constructed in 1923 by architect Clarence Johnson, Boys’ Cottage 11 housed 30-35 boys from ages 6-13. Highlights include original terrazzo flooring, bathroom fixtures and woodwork. This is your only opportunity to walk through an original cottage from the orphanage era. Most of the rooms in the cottage are equipped with an audio station. Each cottage had a matron and how you were treated was the luck of the draw.

Some matrons were loving and others ruled with an iron fist. Stories of children being punished and beaten by their Matron’s filled the rooms. My heart broke for these children and I wanted to go back in time and rescue all of them. The cottage was not a happy place, the children had to enter and leave from the basement door. Each one had a chair and that is where they sat and waiting to leave. The chair controlled, it was for institutionalization, punishment, and away of life. I ran my fingers a cross the chair tops, as a child with ADHD, I had no doubt that I probably would have been tied to one.

My Dad and I had enough of Cottage 11 and made our way outside. We sat under a group of trees taking in the view of the campus. It was hard for us to picture a happy life as an orphan at the state school. Could you imagine being a scared child and pulling up in front of this large intimidating building that you were to call home. Not knowing a soul, your family gone, and your identity was whittled down to a six digit number. You were no longer a name, you were a number in a sea of broken souls.

After taking in the breeze we made our way into the Main building of the school, which houses the main orphanage museum and serves as the administrative offices for the City of Owatonna. This u-shaped hall hosts display cabinets filled with photos and artifacts of the children who called this place home. The stories and photos in the cases will break your heart. Most are happy stories others not so much. They speak of eating mush in the dining hall, of walking two by two where ever they went, and of siblings being kept apart. 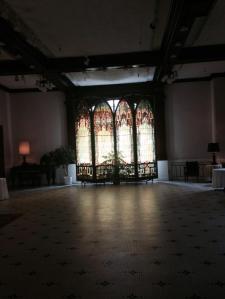 You can visit the schools dining room, today it serves as a public event space for weddings and gatherings. If you ask me I could not have a wedding or a party in such a painful place. Then again maybe the surviving state schoolers would want a little bit of joy in the place they call home. Many of the children who survived got used to being institutionalized and did not know how to function in the outside world. Many didn’t even know that a different type of life existed beyond the borders of the school. When they were 18 they were turned out into the world, little institutionalized citizens that were expected to thrive. Most didn’t thrive, they took a nose dive into the ground and spent their lives wondering. Broken souls trying to make it in a world that doesn’t understand that they were raised without a loving hand.

This trip was a lot of fun and I learned a lot about the Orphanage and the kids that called it home. I kind of wish they still existed, because if they did I could walk in and pick out my child. I could take him or her home same day instead of waiting for our government to sort out the paperwork for me to bring an orphan home from overseas. Then again the government is not good at raising children. If you find yourself in Owatonna step back in time and visit the school. Its free and you will walk away forever touched by the stories of the children that called it home.