The American Heart Association unveiled there new campaign earlier in the summer. The campaign is simple yet powerful. “Tell us your why.” Today I attended the American Heart Association’s “You’re The Cure Advocacy Summit” and one of the activities was to tell our “why.” We were given t-shirts and markers to write our why. I had so many reasons for my why yet only one would fit on the t-shirt. 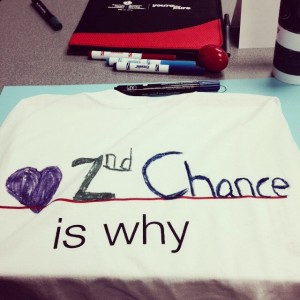 2nd Chance is why.

On October 22, 2009 I got an early birthday present. It did not come in a box wrapped in pretty paper with a bow. It came on the heals of disaster, my future it looked bleak, but in one sheer moment I realized that I was still here. I was alive, thou in extreme pain and a little worse for wear, I was a live. I got LIFE for my 27th birthday. That is the greatest gift anyone could ever receive. A second chance to take on the world, to love, to laugh, to explore, but mostly a second chance to live life the way it is meant to be lived. I have been living on borrowed time, the good Lord above has given me five beautiful years and I plan on borrowing a few more. I am not done living. My life, it has only just begun.

So many young women have died from pulmonary embolisms, strokes, and heart disease. Those women were robbed of becoming Aunts and Mothers. I got a second chance and in that chance I was able to hold my buddy in my arms. Nothing brings me more joy than being an aunt. I love this little girl with all of my surviving heart and I will continue to fight for her healthy tomorrow. 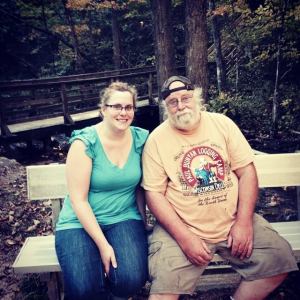 My Father is why.

12 years ago my father was only 50 years old when he was rushed to Saint Mary’s Hospital in Rochester Minnesota. He was dying, his heart was in Ventricular Fibrillation and Congestive Heart Failure. It didn’t look good and he was fighting for what little life he had left. Death, it was the only possibility. Yet with the expertise of the Mayo doctor’s he walked out of that hospital two weeks later. Yes, he walked out under his own power two weeks later. My father got a second chance at life. In the past 12 years he got a chance to see me graduate from college, a chance to walk me down the isle, and a chance to be the rock I needed when I was recovering from my PE and stroke. But mostly he will get to stand by my side as our plane touches down in Cambodia and watch me meet my child for the very first time.

Emma Beaulieu was the first infant in Minnesota to receive a heart transplant. She was three months old when she got her new heart and sadly she passed away three years later due to complications of the common cold. Emma is why my family has been involved with the American Heart Association. Because someone dared to make a difference, she was given three years to live. Some may say that was a waste. I beg to differ, because of what they learned from Emma, thousands of children have been saved. Congenital Heart defects are no longer death sentences, they are mere stumbling blocks, and survival rates continue to sky rock it. All because of one little girl who went first.

My extremely great grand father Bazile Hudon Beaulieu was a voyager who sailed across the Atlantic, through the great lakes, and landed on the shores of Minnesota. He founded this great state that I call home. Its only fitting to name my future child after him. In her own right she is like a little voyager, crossing the globe to find her home in my arms. Bazile is out there and I cannot wait until the day I get on that plane and bring her home. Bazile is my why, I want her to grow up in a healthy world free of heart disease and stroke. Mostly I want her to grow up in a world where women are no longer being harmed by their hormonal contraceptives. I will be damned if Bazile ever has to endure my fate. Bazile is getting one hell of a fighter to call Mom. I will fight for her until my last breath.

I want to have a billion more tomorrows. A billion chances at seeing the sunrise and set. I want a billion nights under star filled skies and a billion bon fires by the shore. I want a tomorrow. I want to get married again. I want to build a tiny home (I am obsessed with them), have a family, travel the world, and mostly I want to secure a healthy tomorrow for all of us. That is my wish that every single one of us will have a billion tomorrows. Life is so uncertain and your tomorrows can be ripped from you in a blink of an eye. I am going to focus on living in the moment and not waste a precious drop of sweet sweet time.