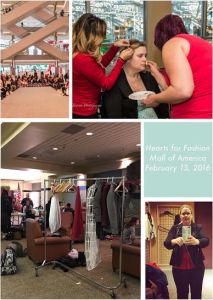 Every February Boston Scientific sponsors the Hearts for Fashion show as apart of the Go Red for Women expo at the Mall of America. The show allows survivors to strut their stuff down the Go Red for Women runway, all while putting a face to heart disease and stroke. Survivors are not the only ones strutting their stuff, the designs of local students who were inspired by heart health, survivors and the color red will also line the runway. This event allows the American Heart Association’s Go Red for Women campaign to educate the public about women’s heart health through fashion. What girl doesn’t love fashion, I know I do.

Last year I was invited to be apart of the Go Red for Women campaign which included posing for a billboard, gracing many bus stops around the metro, and being a part of a PSA commercial that was aired on channel 9 through out the month of February. I am not use to being in front of the camera, I am the quiet type that walks the capital halls, so it was a big change for me and I am glad that I did it.

This year I was invited to walk the runway in the Hearts for Fashion show. I have watched the show for many years and always thought it would be fun to be a model in the show. When the offer came I gladly accepted and waited for the day to arrive. My outfit was on loan from Macy’s Mall of America and Ginny did a great job at dressing me. I was a little bummed that I did not get to wear a red dress in the show, but its ok I got to rock a modern suit instead.

I had to be at MOA by 8AM for makeup and hair. Our makeup and hair was done by the Minnesota School of Cosmetology students. The girls did a really great job with my updo and makeup, they made me feel like me but better. With hair and makeup in the bag it was time to get dressed. Jay was in charge of collecting my parents and bringing them to MOA for the show. Jay was successful and soon they arrived and Jay’s eyes lit up when he saw me all done up. That’s how I knew the girls did good. A ton of photos were taken and soon we were released to go down and watch part of the show.

I didn’t practice my walk. Being in heels made me nervous, I just said a little prayer and hoped for the best. Lucky for me I didn’t trip!!! That is a miracle in itself and I took on that runway like I was made for it! Yay! Go Me! That is until I looked over and saw my Daddy and Jay plus my Mama all teary eyed. It took everything in me to hold it together, if I see tears I start to tear up, so it was a miracle that i didn’t start crying too. Now Sherri she was the only one holding it together like a boss. Survival is more than the survivor, without my parents and Sherri who knows where I would be, they have been with me since day one of survivor-hood. 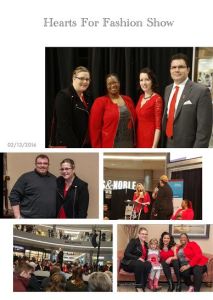 Being in the fashion show was a lot of fun and I know Jay had a blast pulling all of the bobbi pins out of my hair. I think he pulled out close to 30 or so, it takes a lot of pins to tack my curly mop down.