I have a long standing love affair with Lake Superior. For me it’s not just a lake, it’s a part of my soul and the story of how my family began. My extremely great grandfather Basile Hudane Beaulieu was a voyager who sailed the Great Lakes and landed on the shores of what we now call Minnesota. He being a frechmen did not speak the Annishenabe language, yet somehow they understood each other and he fell in love with Chief Skywoman. An that is how one side of my story began.

As a child I walked her shores collecting sea glass and rocks. She drew me in like an old friend each crashing wave comforted my soul. As an adult on my drive up north, I get giddy knowing that as each mile ticks by I am getting closer and closer to her shore. When my blue eyes meet her, my worries melt away and I feel at peace. Superior has this affect on people, she is powerful and calming in one full breath. 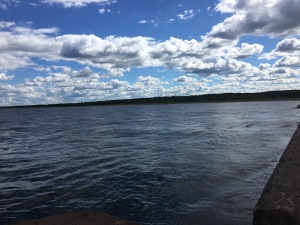 For Jay’s birthday I took him on a mini road trip to the north shore. I took him to my old college haunts The Anchor Bar, the S.S. Meteor, the UW-Superior Campus, and Wisconsin Point.  He listened to me chatter as the memories of college came flowing back. I explained how we use to walk to the mall to see movies, the grocery store to get snacks and beer and the other things that we did. Ahh college was the best time! My fondest memories are of the bon fires we would have out on Wisconsin point, those were good times to be had. 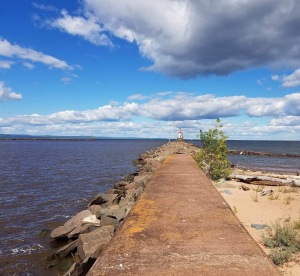 When we pulled up Jay was instantly drawn to the light house and for some odd reason we decided it was a good idea to walk out there. Walking out to the light is no easy task. There is no walk way, you just jump from bolder to bolder and hope for the best. On our way out to the lighthouse we encountered a snake and to many spiderwebs to count. 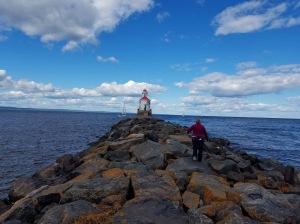 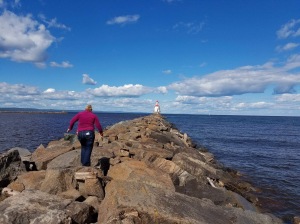 One might think “oh that looks like an easy feat.” Trust me it is not. It takes a lot of effort and balance to get from rock to rock and it’s about a mile each way. Jay and I high fived as we hit the light house steps for we had made it and in that moment we didn’t think about our return journey back.

The light house has not been used in years and she has seen her share of storms. Most of the windows have been bricked over and some pricks are filling the broken windows with beer cans and other trash. Little graffiti was seen but you could tell that this little light had seen her hay day.

It was starting to get late and we did not want to get stuck at the light so Jay and I decided to make our way back to shore. When we reached land Jay declared that if he had a bucket list the lighthouse  would have been a bucket list item. He loved Wisconsin Point as much as I do and asked that we return next year. I said of course, nothing can keep this girl from Superior. For she has a long standing love affair with her deep blue waters.