The American Heart Association had a dream, a dream to create an army of life savers. In 2011 they along with legislators drafted a bill that would require all children in the State of Minnesota to learn hands only CPR before they graduate. Now that was a good dream, one that we pushed hard for. Tireless days were spent pounding the capital halls, sending emails, and phone calls until we were blue in the face. We watched our bill pass in the House and then the Senate. The next stop was the Governor’s desk. The pressure continued with drop in visits, phone calls, we were not going to give up until the Governor signed our bill into law. 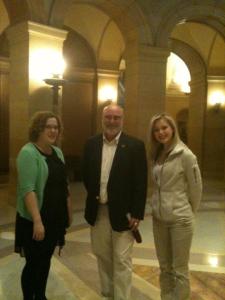 For me I had one girl in mind when I walked into the Governor’s office and that was Jamie. Jamie is a sudden cardiac arrest survivor who died at 18, however she was brought back from the brink with a little CPR. CPR can and will save lives. The Governor heard our cry loud and clear, April 23rd will be a day to remember. On Monday, April 23, 2012, Gov. Mark Dayton signed the CPR Training in Schools bill (HF 2329/SF 1908) into law.

One day when my children complain about having to learn CPR in class, I will say “Hey now, your Mama lobbied hard for that law and now you will have the ability to save a life!” I am one of the few who can say, “I set out to change the world, and I did exactly just that.” To you the change may be small, but for survivors like myself it means that one more person has the chance at life.

To all of you who emailed, called, and visited the Capital I want to thank you from the bottom of my surviving heart. Without your help and the American Heart Association this Law would not have been possible.