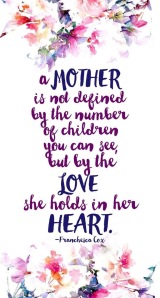 A year has almost passed since a bright blue plus sign appeared. I sat on the floor staring at it in disbelief. It was a good 30 minutes before it sunk in that the plus sign was for me and that a baby was on board. I was given a second chance at motherhood and Jay would be a first time father.

In the six weeks that followed we started picking out names and nursery themes. Jay looked up baby gear on the Internet and spoke softly to my stomach. Jay was attached the instant I told him and for me I was slowly falling in love with a group of cells. My Dad started making the mobile just like he did for Luica, birds, I wanted birds for this baby. He obliged and went to work. My parents were excited to have a fifth grandchild to spoil and love on. Their excitement helped mine grow. With a little luck and a lot of faith everything would be all right.

If you are familiar with child loss then you know all pregnancies that follow are considered high risk and there is a viability scan around 6/7weeks. This scan terrified me and I dreaded the day of our appointment. Perinatal doctors had failed me before, the fear and anxiety that I had was raw and real. The ultrasound would be my enemy, it could either make or break this pregnancy. An empty sac appeared on the screen. At almost 7weeks a fetal pole should have been inside beating away.

I carried the little sac that couldn’t for 12 weeks. The Doctor and I called it, a plan was put in place and a D&C was scheduled for July 7, 2015. Jay couldn’t miss work so my Mama took his place. I had the sweetest nurses. My Nurse Ann made sure I knew what and where baby land was, she held my hand and gave me a hug as I headed off to surgery. A few days after surgery I got a call that my pregnancy contents had been cremated and sprinkled in Lake Wood Cemetery’s baby land, our baby is resting with a view of Lake Calhoun and I can walk over and visit if I chose to. Weeks later the pathology report would show that it was more than just a sac, it was a partial molar pregnancy, two sperm fertilized one egg and our baby had more chromosomes than it needed.

Unlike Lucia, Baby E gave me a why and that was all I needed, I was able to be a peace with the leaving. Baby E has given me hope that I to will have a baby one day, it’s just rainbows are elusive and they are hard to catch. I have faith that my turn is just around the corner and that one day I will get to carry a baby to term. For Motherhood is a job that I desperately want.